We all must come to terms with our upbringing. For some there is more pain to work through than for others. I had what one might call a proper upbringing. Yet still, one filled with my share of pain. My mother was not in London during the 57 nights of the Blitz. This was of course poetic license on my part. She was however living in London during 1943 and 1944 during WWII. She became a lifelong Anglophile. This fact set up some difficult goals for her children to attain for they were not living in Great Britain. They could not become British.

Sometimes due to her scrapbooks I feel as though I was there, in London during the war.

There was a time that I knew nothing about war. An experience that I had in 2005, dictated that I learn about war. Mummy never spoke of her work in London during WWII. She worked for the US propaganda office or the OWI – Office of War Information. I really never knew until I found two scrapbooks while cleaning out the family home. Finding these scrapbooks made me realize what a brave woman she had been. Instead of harboring resentment towards her (resentment that she earned) I came to have significant admiration for her.

I wish to redo these books as they are in a state of disintegration. However, it is exceptionally difficult for me to do so. I am very emotional about the subject. Politicians never give thought to the consequences of wars into which they enter. They have no clue as to the gravity of the collateral damage that accompanies their warring ways. The United States of course had to enter WWII. But, Hitler did not have to begin The War To End All Wars. That war like so many have touched people down through the ages, ages long past the end of the war in question. War shapes people for ages to come.

The following paragraph is taken word for word out from Wikipedia:

“On 31 December, the Daily Mail took the unusual step of publishing the photographer’s account of how he took the picture:
“I focused at intervals as the great dome loomed up through the smoke. Glares of many fires and sweeping clouds of smoke kept hiding the shape. Then a wind sprang up. Suddenly, the shining cross, dome and towers stood out like a symbol in the inferno. The scene was unbelievable. In that moment or two I released my shutter.” – Herbert Mason

The photograph was taken in the early hours of Monday morning and was cleared for publication by the censors to appear in the issue of Tuesday 31 December 1940. 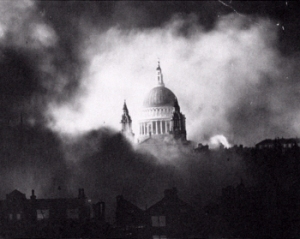 This poem is for the prompt by Victoria Slotto at dVerse instructing us to “Banish boredom thru verb use. Thank you Victoria – you sent me back a bit! I am grateful. You can find her poetry here.

I had a significant spiritual experience in 2005. It radically changed my life. It was the second life changing spiritual experience that I have had. The first was Christian in nature. The experience came to me via my plea “what do you want me to do? What should I do now?” The experience was the answer. This experience was shamanic in nature. Shamanism is something that I have studied for years. This experience lasted about 6 weeks and made me appear to be having a “breakdown” of some sort. My friends were quite worried. My husband trusted me but worried nonetheless. It was very dramatic, painful and ecstatic. I knew that I was doing exactly what I was meant to do. None the less I hung on for dear life. It was extremely hard to remain grounded. To do so I engaged the services of three different people. I remember one particularly humorous act (although I as not laughing at the time). I found myself purposefully in Forest Park a great deal answering to my experience. I was in touch with a Great Horned Owl and a Red-Tailed Hawk who each resides in this huge park. One evening I was meant to take to the hawk, as an act of thanks, a chicken wing and place it upon a particular iron pole that was 5 inches in diameter and about 3 feet high that sat in the middle of the ball fields. It was Friday night. My husband kindly came with me to Straub’s the family grocery where I shop. On Friday night the place is mobbed. So, I get in line at the butchers and wait until my turn. There is quite a wait. When it is finally my turn I order one chicken wing. Everyone else in line waiting their turn goes nuts. One chicken wing? Well no actually just a half of a wing I do not want the drummy.

For all of my life veterans were to be thought of on Memorial Day and on Veterans day. I was conceived immediately after WWII. So, my relation to veterans was not unusual. After my experience in 2005 that included experiencing the emotional torment of those who have seen battle changed me radically. I studied war. I volunteered at the VA for several years and I gained a healthy respect and love for veterans. I might add I truly gained a deep respect and love for Vietnam Vets as they are of my generation. I also acquired an abhorrence for war. I truly came to understand “love the warrior, hate the war. Most cannot enter into that cliche and act upon it. It is very tricky and very difficult.

The other thing that I did was write about 20 poems about war, veterans, acts of war … really anything that came out of my experience that year. I wish to post them here for critique, literary critique. The changes that I make as a result of this criticism will be made in my files, not within the blog post. I will thank you a head of time for your reading and criticism. My first poem has been up and critiqued so I will begin with the second. It is titled: “A Certain Madness.” It is about those who attended one particular writing class at the VA.

Each one came, soldier, marine, airman, frog
walking quietly as if wrapped from within
the cocoon of his own world.

War’s sad energy like a gray
heavy mist lay upon the shoulders of each,
reality spiking their dull black piercing shadows.

Each man sat at the table abandoned.
“Just a word”?
“Coffee please”.

“May we write yet?”
And then he stood.
A large and heavy presence, poorly balanced.

He shouted …
“Don’t you see them?
There, in the corners … one in each corner.”

“How dare they come here?
I ought-a know,
I was with the CIA.”

Then he sat down defeated again.
He seemed to relax until another
Stream of madness crept out of his throat.

“I will NOT be giving you a sample today!
There will be no writing samples.
THEY … are here for that reason you know, to collect them.”

And I thought to myself,
Does the madness hide the pain?
Or perhaps this pain drives one mad.

I adored my father as he adored me.  Sadly at 6 years of age this came to an abrupt halt.  AND I made many poor choices in the first 27 years of life as a result.  At the late age of about 63 or so due to a spiritual experience and several years after his death, I re-captured that love miraculously and bathed in it for about 3 months.  Happy Father’s Day to all fathers out there. 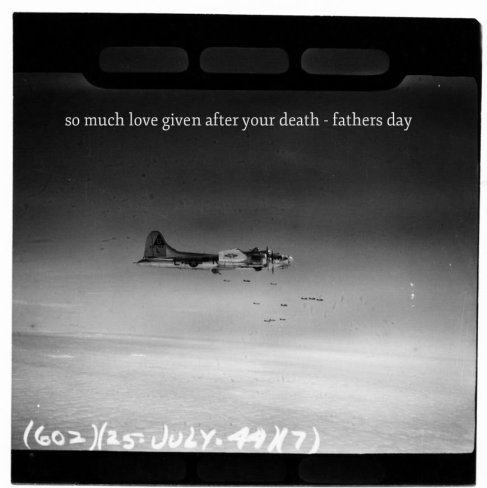 Photo from my father’s WWII album – B-17s on their way to Germany.

My mother was once beautiful, elegant, sophisticated.  Easily I remember the cocktail parties.  Mummy and Pup were always at the center of any social gathering.  But home was not really a social gathering now was it?  No, home was where you were real.  And reality at home was very different and very difficult.  I have known for quite a number of years now that Pup was scarred deeply from combat PTSD in WWII.  That makes for very easy forgiveness.  It was not until two years ago that I realized quite fully; that Mummy, as a US citizen worked for the Office of War Information in London during the Blitz.  Once I knew and understood, complete forgiveness was very easy.  Her experience was no different than combat.

mother elegance with flair – soul lost to the london blitz